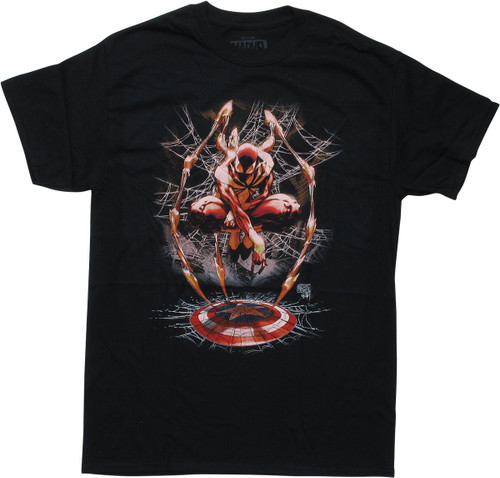 Spider-Man traps Captain America's shield in webbing on this dramatic Civil War t shirt! The Civil War Issue 3 Turner Iron Spiderman T-Shirt is black. It reproduces a variant cover for Marvel Comics' Civil War #3 (2006) by artist Michael Turner, with Spider-Man using the "Iron Spider" armor invented by Tony Stark/Iron Man, with three mechanical "spider-arms" holding down the web-encased shield. Spidey was on Iron Man's side. Whose side are you on?

Size Chart
The items listed on StylinOnline.com come from many different manufacturers. These measurements are an average estimated for each type. All shirts should be within 2" or 3" of these dimensions. Many of these garments are 100% pre-shrunk cotton and may shrink during cleaning, please factor that into your choices.
TS_SPIDERMAN_TURNER_CIVIL_WAR_VAR
Size
×