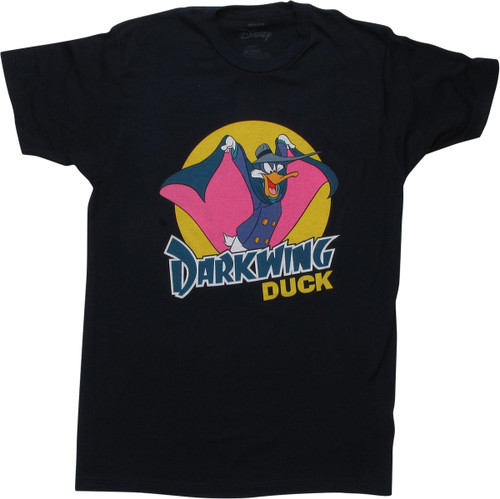 Return to St. Canard and relive the adventures of Drake Mallard with this fun Darkwing Duck t shirt! The Darkwing Duck Cape Stance Navy Blue T-Shirt is navy blue. It features the title logo for Disney's Darkwing Duck animated series, a spoof of pulp hero comic book series, with a moon-like gold circle framing an image of Drake Mallard in his superhero guise as Darkwing Duck, raising his cape in a dramatic pose. "Darkly Dawns the Duck."

Size Chart
The items listed on StylinOnline.com come from many different manufacturers. These measurements are an average estimated for each type. All shirts should be within 2" or 3" of these dimensions. Many of these garments are 100% pre-shrunk cotton and may shrink during cleaning, please factor that into your choices.
TS_DARKWING_DUCK_CAPE_STANCE_NAVY
Size
×