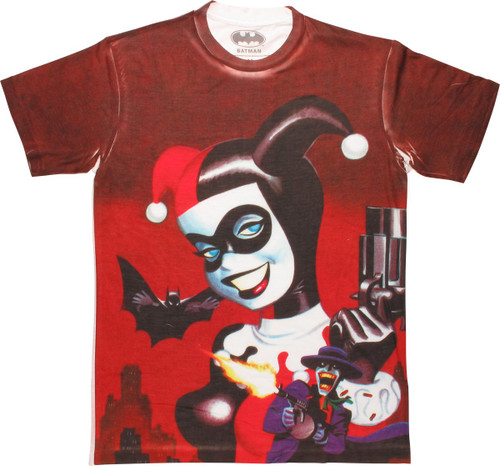 Relive Harley Quinn's obsession-fueled origin story wearing this wild Harley Quinn t shirt! The Harley Quinn Joker Shots Sublimated T-Shirt is white with a distressed print. The front is covered by a dye sublimated print that reproduces the cover of DC Comics' Batman Adventures: Mad Love one-shot from 1994, with Harley Quinn holding a popgun while the Joker fires rounds from a machine gun and Batman leaps to do battle above a shadowy Gotham City!

Size Chart
The items listed on StylinOnline.com come from many different manufacturers. These measurements are an average estimated for each type. All shirts should be within 2" or 3" of these dimensions. Many of these garments are 100% pre-shrunk cotton and may shrink during cleaning, please factor that into your choices.
TS_BATMAN_HARLEY_SHOTS_SUB
Size
×