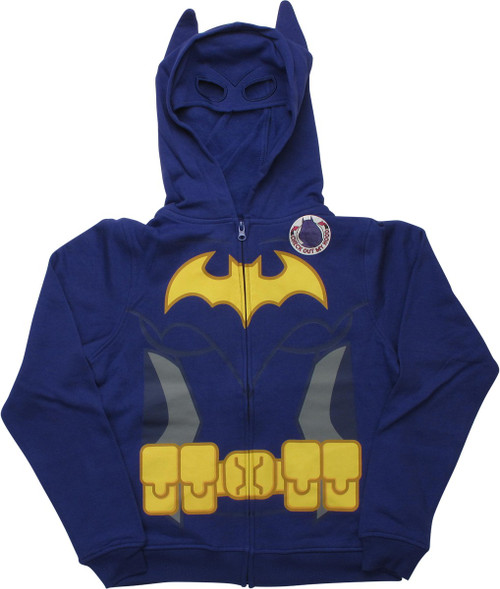 Team up with the Dark Knight for some light fun wearing this colorful and cute Batgirl hoodie and costume in youth sizes! The Lego Batman Batgirl Caped Costume Youth Hoodie is purple with a Velcro-attached cape, attached ears, cowl and mask, and a zipper closure in front. Inspired by the Lego Batman toyline and DC Comics' Batman series, this warm and comfortable hooded sweatshirt mimics the crime-fighting outfit of Lego Batgirl, with a gold bat-logo, armor plating lines in gray, and a gold utility belt image on the front. The gold cape in the back features the name "Batgirl" in purple letters above a cartoon image of Lego Batgirl from The Lego Batman Movie. "If you call me Batgirl, can I call you Batboy?"

Size Chart
The items listed on StylinOnline.com come from many different manufacturers. These measurements are an average estimated for each type. All shirts should be within 2" or 3" of these dimensions. Many of these garments are 100% pre-shrunk cotton and may shrink during cleaning, please factor that into your choices.
HO_BATMAN_LEGO_BATGIRL_GIRLS_YTH
Size
×