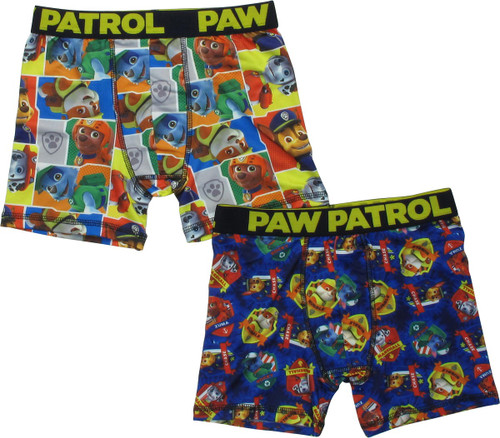 Grab your Pup Pack and wag to the rescue wearing this colorful and fun set of PAW Patrol boxer briefs for boys! The Paw Patrol Pups and Names 2 Pack Boys Boxer Briefs includes two pairs of youth-sized briefs with black waistbands featuring the title logo for TV's PAW Patrol cartoon series about a canine team of first responders. Each pair features images of members of the search and rescue squad including Chase, Marshall, Rubble, Zuma and Rocky. Yelp for Help!

Size Chart
The items listed on StylinOnline.com come from many different manufacturers. These measurements are an average estimated for each type. All shirts should be within 2" or 3" of these dimensions. Many of these garments are 100% pre-shrunk cotton and may shrink during cleaning, please factor that into your choices.
BOXER_PAW_PATROL_PUPS_2PK_BRIEF_YTH
Size
×