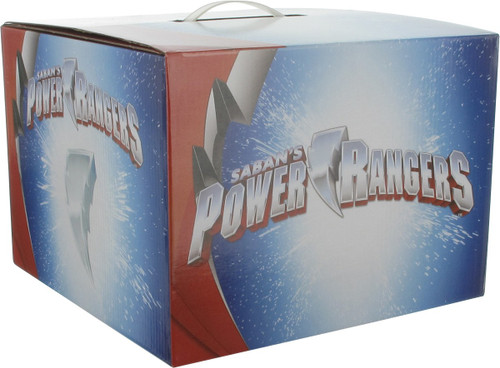 It's always "Morphin' Time" with the centerpiece of this gift set, a 15-ounce, heat-activated coffee mug that switches from black to green and blazes with an action portrait of the Green Ranger throwing a martial arts punch! When it turns green the mug also displays the Green Ranger's "Dragonzord" power coin with a "white triangle" design pattern.

"Energize" with the set of five white coasters that display each of the power coins (except green) surrounded by their corresponding color and the words "Power Rangers."

"Go Galactic" with the can koozie, which is bright red with white triangles and two images of the Tyrannosaurus power coin of the Red Ranger.

"Power Up" with the lanyard, which has a clear plastic badge holder and a die-cut emblem featuring the dramatic yellow lightning bolt from the Power Rangers logo! The lanyard is blue on one side with images of power coins and the series' logo, while the other side has blue, red, black, yellow and pink panels framing portraits of the teen Power Rangers! "Go Go Power Rangers! Together We Are More!"

Size Chart
The items listed on StylinOnline.com come from many different manufacturers. These measurements are an average estimated for each type. All shirts should be within 2" or 3" of these dimensions. Many of these garments are 100% pre-shrunk cotton and may shrink during cleaning, please factor that into your choices.
COMBO_POWER_RANGERS_GIFT_BOX
×