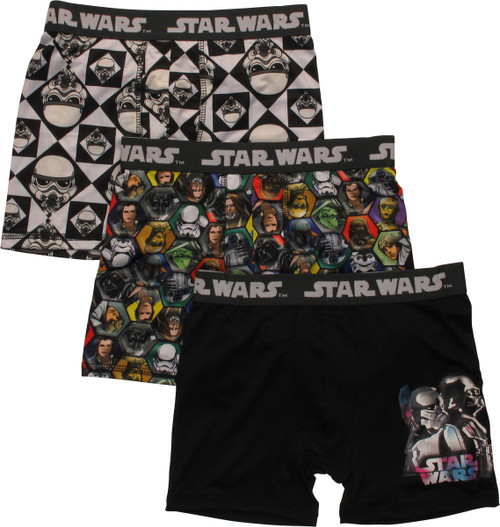 The Force will stay with you when you wear these fun Star Wars boxer briefs for boys! The Star Wars Empire Faces 3 Pack Boys Boxer Briefs include three pairs of briefs in youth sizes. Each pair has a black waistband with the title logo from the Star Wars movie series in gray letters. One pair is black with a portrait of Darth Vader and a Stormtrooper, one pair is black and white with images of Stormtroopers, and one pair has multicolored panels framing Darth Vader, Boba Fett, a Stormtrooper, Yoda, Luke Skywalker, Han Solo, Chewbacca, Obi-Wan Kenobi, R2-D2 and C-3PO!

Size Chart
The items listed on StylinOnline.com come from many different manufacturers. These measurements are an average estimated for each type. All shirts should be within 2" or 3" of these dimensions. Many of these garments are 100% pre-shrunk cotton and may shrink during cleaning, please factor that into your choices.
BOXER_STAR_WARS_EMPIRE_3PK_BRFS_YTH
Size
×